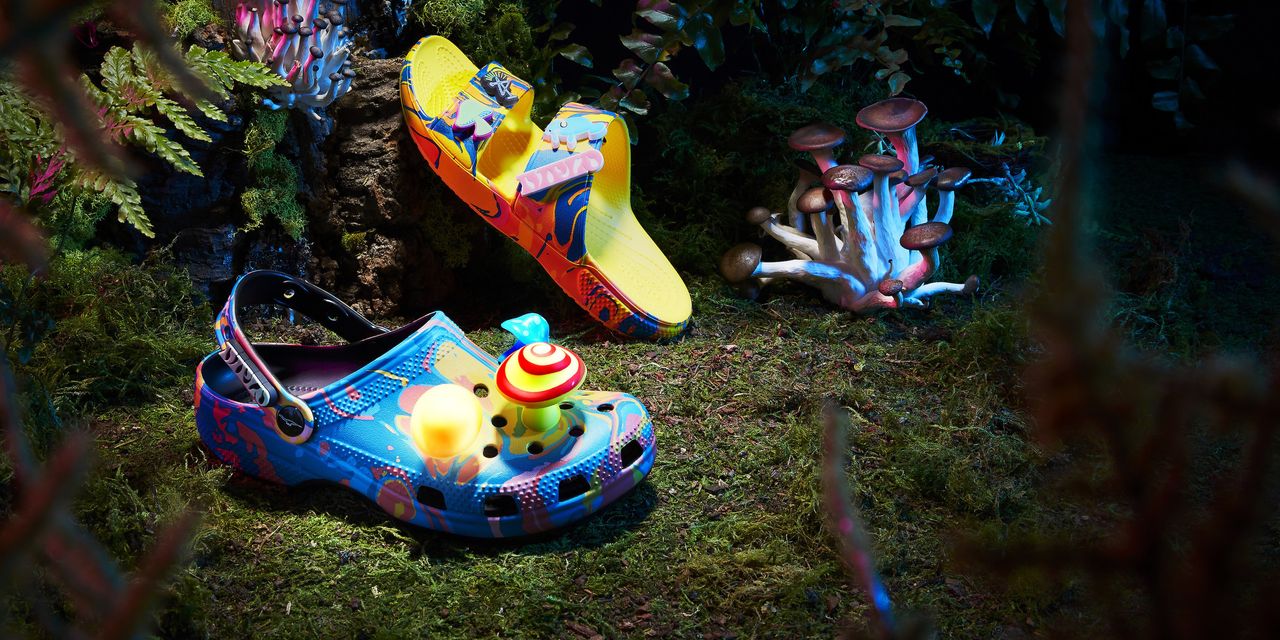 Crocs have stepped up their game.

The bulky, rubbery clogs that “Project Runway” fashion guru Tim Gunn once called “plastic hooves” and Victoria Beckham said she would “rather die” than wear have remained a divisive fashion piece for the past two decades. Fans say that Crocs
CROX,

are comfortable, however, and the affordable price tag (running between $30 and $60 for most pairs) hasn’t hurt, either. The supportive shoes have also become a staple for many health-care workers who spend long hours on their feet.

And now the ugly-fashion icon is emerging as a pandemic Cinderella story.  In fact, deejay and producer Diplo dropped his Crocs collaboration on Tuesday — and fashion house Balenciaga is turning them into …. stilettos?

Before, the Crocs brand was working to regain its footing after it nearly declared bankruptcy during the Great Recession. It closed 160 stores while restructuring in 2018, and shares were down almost 36% last May as the pandemic forced Crocs to join many retailers in temporarily closing its doors.

Now, the likes of Diplo, rapper Nicki Minaj and musician Questlove are elevating the chunky slip-ons to be some of the must-have shoes for summer 2021.

For one thing, Crocs has been expanding its styles beyond just clogs, and launching celebrity collaborations with Justin Bieber, Post Malone, Priyanka Chopra and Bad Bunny that have made them popular among Gen Z shoppers. The company just reported record first-quarter revenue in April, which came on the heels of a year of record sales in 2020 when it sold a whopping 18.9 million pairs of shoes in its fourth quarter alone.

Diplo is the latest Crocs collab, debuting two pairs of psychedelic shoes. The pair of Diplo clogs come in a swirled pink, blue and yellow paint-inspired graphic print, and each shoe is topped with a light-up, three-dimensional mushroom charm. There’s also a two-strap sandal resembling a Birkenstock that’s colored with a swirled yellow, orange and blue pattern, with more glow-in-the-dark charms. They’re $70 and $50, respectively.

Rapper Nicki Minaj returned to social media after a five-month hiatus in May wearing a hot pink bedazzled pair, which led searches for “pink Crocs” to begin spiking on Google.

And Questlove made headlines when he recently rocked a gold pair at the Oscars.

And this move will help give the brand even longer legs, analysts say. “Support of frontline medical workers, ever-increasing personalization options, and successful collaborations have driven an increase in brand consideration, and this should lead to improved momentum in Crocs’ clog and sandal businesses going into next year,” wrote Sam Poser at Susquehanna Financial Group.

Sure, Crocs remain one of fashion’s most controversial styles. But lockdowns let people love their Crocs in peace, celebrity stylist and TV personality Phillip Bloch told MarketWatch. “You don’t have to hide your shame because you’re hiding at home,” laughed Bloch — who admits he owns a pair of gold-painted Crocs that he loves. “Besides, comfort is king. Coronavirus comfort couture is where it’s at — suits are gone, and track suits are in,” he said.

So there’s less and less shame in stepping out in comfy clothes. Indeed, Questlove noted on Instagram that he embraced Crocs during the pandemic. “I became a believer in quarantine last year when I decided im [sic] tired of suffering while stunting,” wrote the Roots drummer and joint frontman. “Comfort first at this stage in my life.”

And he’s certainly not alone. Even before pandemic shutdowns pushed millions of employees to start working from home full-time, folks were already shifting to more casual attire and saying “heel no” to uncomfortable shoes and clothes. Just look at athleisure’s growing domination over the apparel industry for the past several years, or how push-up and underwire bra sales have sagged compared to comfier bralettes. Vice President Kamala Harris has sported Nike-owned
NKE,

Converse sneakers on the campaign trail and on the cover of Vogue.

So this past year and a half spent adjusting to life under COVID-19, not to mention political and cultural turmoil, has left shoppers even more desperate for comfort and security, according to a January NPD Group report. It lists four key themes driving the comfort movement: working from home; an emphasis on stress relief; health and wellness efforts; and an overall casualization shift. “Gone are the days of stiff, uncomfortable fashion; today we say hello to comfort power categories,” the report muses, anticipating a trend toward “a lot of expandable waistbands and stretch” that will continue even after the pandemic is eventually over.

Related: The Devil Wears Joggers: Even Anna Wintour is living in sweatpants during the pandemic

So it remains to be seen what audience, if any, there is for a pair of uncomfortable-looking stiletto Crocs from Balenciaga. No price has been announced for the shoe yet — but the New York Post notes that previously, Balenciaga’s $850 platform clogs reportedly sold out before even being available in stores.

What’s more, Bloch believes that as the world has gained a renewed respect for health-care workers during the pandemic, these workers’ preferred choice of comfy but sturdy footwear has also benefited by association.

“I think in this time when nurses and frontline workers have become heroes for us, why shouldn’t they be fashion plates, as well?” he asked.