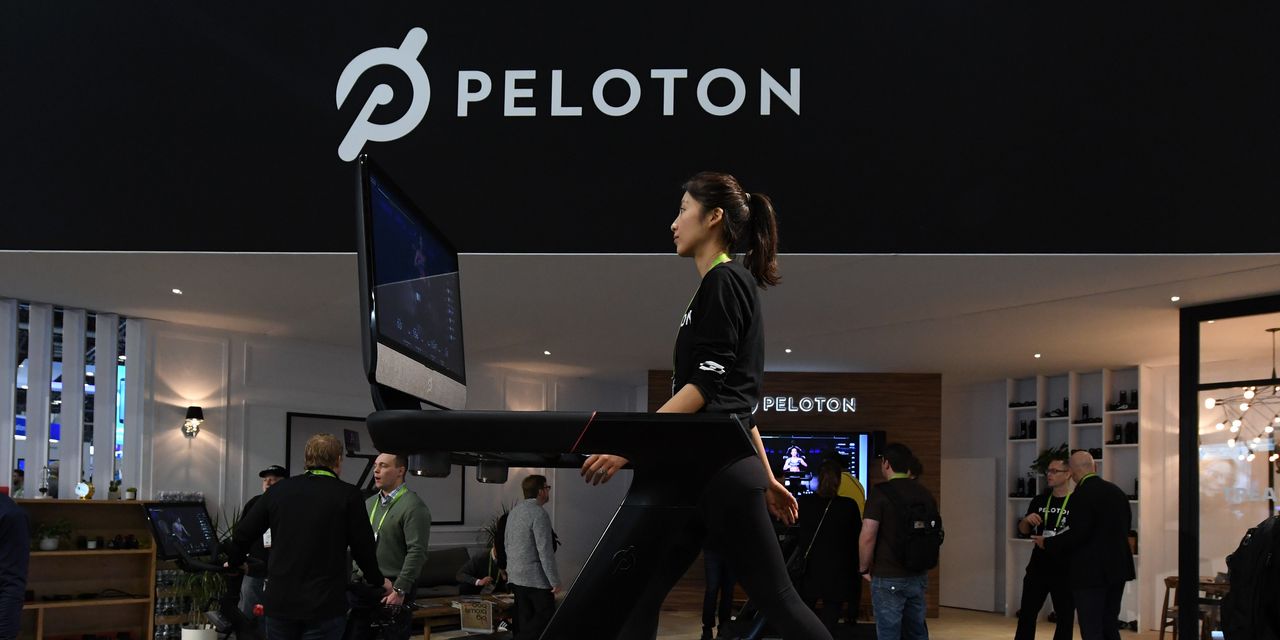 Shares of Peloton Interactive Inc. fell again Thursday toward an eight-month low ahead of the at-home-fitness company’s fiscal third-quarter results, but the technical damage may have already been done with the formation of a bearish head-and-shoulders chart pattern.

was down 0.5% in afternoon trading, reversing an earlier intraday gain of as much 3.3%. The stock was on track for its lowest close since Sept. 14.

On Wednesday, the stock tumbled 14.6% after the company did an about face and decided to recall its Treat+ treadmills after a child died, and many others were injured. Chief Executive John Foley apologized, saying it was a “mistake” to resist the urging of safety regulators for a recall, until about two months after reports of the death first surfaced.

The company surprised analysts by also voluntarily recalling 1,050 Tread treadmills citing risk of injury, as the touchscreen can detach and fall.

BofA Securities analyst Justin Post followed by downgrading Peloton to neutral from buy and slashing his price target by 33%, to $100 from $150.

Post said the potential loss of Tread+ subscribers given the company’s handling of the matter is not his biggest concern surrounding the stock’s valuation, as the Tread+ made up only about 5% of total subscribers.

His biggest concern is the impact of the much smaller recall of the lower-priced Tread treadmills, as his bullish stance on the stock was based on expectations that Tread sales would provide a “significant growth driver” in fiscal 2022. Post now believes both the U.S. launch of Tread and potential unit sales could be delayed, “enabling an opportunity for competitors.”

UBS analyst Arpine Kocharyan said besides delaying the rollout of the Tread product in the U.S., which was originally scheduled for this month, the recall’s risk to investors includes the potential negative effect on brand quality, safety reputation and consumer purchasing sentiment.

She reiterated her sell rating and $124 stock price target.

The company has previously released six quarterly reports since going public in September 2019. The stock has closed lower on five of the six days after results were reported, by and average of 6.0%. The one time it rose, it soared 16.0% after fiscal third-quarter 2020 results.

Wednesday’s stock selloff confirmed the break of the “neckline,” that defined a classic head-and-shoulders chart pattern.

The head-and-shoulders is of the best known and more respected trend reversal patterns, as it depicts a change in tide at the end of a long-term trend.

The first shoulder and a new high at the top of the head of the pattern — a higher high — represents success of the uptrend. The second shoulder — lower peak — represents failure to continue the uptrend, while a break of the neckline — lower trough — suggests bulls have given up.

The stock got a major boost last year from the stay-at-home trend resulting from the COVID-19 pandemic. It had soared 758% from its March 2020 closing low of $19.51 to its January high. The pullback began as the rollout of COVID-19 vaccines weighed on pandemic beneficiaries. The stock has now shed 44.6% over the past three months, while the S&P 500 index
SPX,

Many say the downside projection of a confirmed head-and-shoulders pattern is derived by subtracting the height of the pattern, which is the spread between the neckline and the top of the head, from the point where the neckline broke. Based on that measurement, the downside target would roughly be $35.

Upside levels to watch would start at the broken neckline.