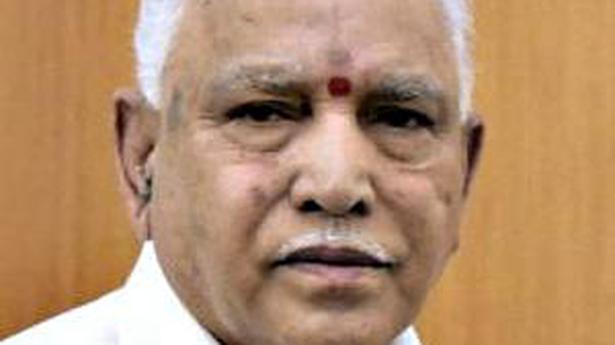 Karnataka Chief Minister B.S. Yediyurappa has said that the State will not allow Tamil Nadu to use surplus water from Cauvery river, beyond the share allocated by the tribunal.

The Karnataka government has decided to file objections before the Centre against the project.

You have reached your limit for free articles this month.

Find mobile-friendly version of articles from the day’s newspaper in one easy-to-read list.

Enjoy reading as many articles as you wish without any limitations.

A select list of articles that match your interests and tastes.

Move smoothly between articles as our pages load instantly.

A one-stop-shop for seeing the latest updates, and managing your preferences.

We brief you on the latest and most important developments, three times a day.

*Our Digital Subscription plans do not currently include the e-paper, crossword and print.

A letter from the Editor

We have been keeping you up-to-date with information on the developments in India and the world that have a bearing on our health and wellbeing, our lives and livelihoods, during these difficult times. To enable wide dissemination of news that is in public interest, we have increased the number of articles that can be read free, and extended free trial periods. However, we have a request for those who can afford to subscribe: please do. As we fight disinformation and misinformation, and keep apace with the happenings, we need to commit greater resources to news gathering operations. We promise to deliver quality journalism that stays away from vested interest and political propaganda.

A letter from the Editor

Your support for our journalism is invaluable. It’s a support for truth and fairness in journalism. It has helped us keep apace with events and happenings.

The Hindu has always stood for journalism that is in the public interest. At this difficult time, it becomes even more important that we have access to information that has a bearing on our health and well-being, our lives, and livelihoods. As a subscriber, you are not only a beneficiary of our work but also its enabler.

We also reiterate here the promise that our team of reporters, copy editors, fact-checkers, designers, and photographers will deliver quality journalism that stays away from vested interest and political propaganda.