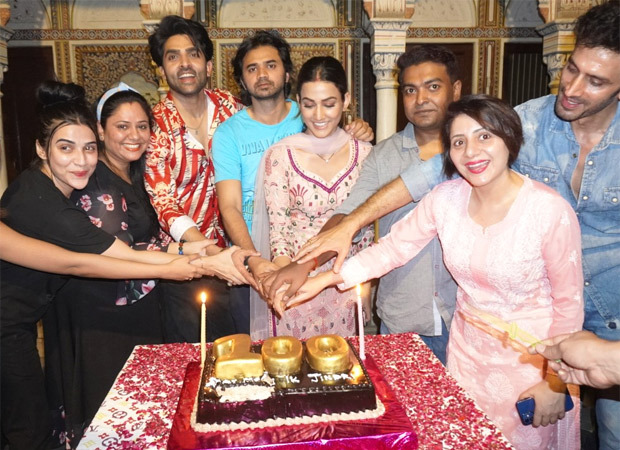 Ever since its first episode aired, Zee TV’s show – Teri Meri Ikk Jindri has been successful in entertaining the masses through its unique love story of two starkly different personalities – Mahi (Amandeep Sidhu) and Jogi (Adhvik Mahajan). While Mahi’s undying spirit and determination have inspired many young women to become independent, Jogi’s carefree nature and optimistic spirit have also been a good influence on many people across India. Having received immense love and appreciation in the last few months, the untiring efforts of both the stars have finally paid off as the show recently clocked its first milestone and stepped into the 100-episode league.

Commemorating their first step towards success, the cast and crew members rounded up at the set to have a small cake-cutting ceremony while keeping all the precautionary measures in mind. Although everybody was on an equally elevated emotional state, relishing the victory, Amandeep Sidhu and Adhvik Mahajan were on cloud nine and just couldn’t control their excitement.

Stating her joy, Amandeep said “I can’t believe we have managed to complete 100 episodes of the show. It feels like yesterday when we had just started shooting for the show and I walked into the set feeling a tad nervous about playing my character. At that time, I didn’t realize that Mahi would become such an integral part of my life. It’s like I have been living her life and there is a lot that Amandeep has got to learn and experience from her journey. A lot of that has to do with the unconditional support that I have received from my team, my co-actors and even our viewers who have been showering us with loads of love from day one. We had a goal in mind when we had started off and now that we have finally reached it, the heart just wishes for many more achievements as such. The kind of love we have received from our viewers is undeniably great and I’m highly obliged for having their constant support. Here’s to marking many more similar milestones!”

Adding further to her excitement Adhvik shared “I’m honestly overwhelmed seeing the kind of success the show has received. I was confident that the concept and our characters would be loved by the audience but now that we have actually hit a successful step, it all feels really surreal. It takes me back to the time when I was really nervous about how my character would be perceived. I used to constantly think of ways to ensure that Jogi is seen as a carefree and slightly flirtatious boy, but also someone who is deeply concerned and respectful of women and the people around him. Today I know for a fact, that our hard work has paid off and that our viewers are constantly in support of us. The journey so far has been a rollercoaster ride, but to get to this stage while crossing all the hurdles is what makes me, or for that matter everybody happy. We actors crave appreciation and acknowledgment from our viewers, and when that seems to pop in, nothing else matters. So honestly, today is one of the happiest days of my life, and I’m going to celebrate it with all my fellow co-stars and cast members who are equally ecstatic about the win.”

While the cast and crew are busy relishing their first win, a  new drama is set to spew between Mahi and Jogi. Mahi finally realizes her deep love for Jogi but unfortunately has to take a bullet to declare her love for him. Who is trying to kill Mahi? Will Jogi be able to avenge Mahi’s killer in due time or will this be an end to Jogi and Mahi’s love story?

ALSO READ: “I made Kheer for the first time during the Mrs. Amritsar Contest sequence and my unit members relished it,” says Teri Meri Ikk Jindri’s Amandeep Sidhu